As you know, I’m constantly looking for everyday expenditures and trinkets to eliminate or minimise. My first priority is spending less money, which makes disposable items my arch enemy. Second in line comes owning fewer possessions or, at the very least, owning only possessions that are sustainable and look neat. Oftentimes, these strivings marry perfectly. This is certainly the case with my new safety razor. After trying it, I’m annoyed and amazed that I didn’t know what a safety razor was until now.

It’s the kind of razor every-fucking-body used before the disposable ones hit the market in the 1970’s. They last a lifetime, look great, function way better and are much cheaper to use than disposable ones. There are absolutely no downsides, so why did we collectively forget about them?

I used to buy regular Gillette razors with disposable blades that are good for a few shaves, which is quite expensive. In my local supermarket, eight disposable blades are about twenty euros. I used these for my armpits, legs and private parts and my dear husband used them for his beard. Between the two of us, this cost about twenty euros a month, not including buying the razor itself once upon a time.

A safety razor can cost anything between fifteen euros and several hundred euros. They’re trending right now and are advertised as a masculine and luxurious way of manscaping in the era of hipsterism and urban, middle class men wearing lumber jack’s clothes and tending to their facial hair as if their lives depended upon it. I decided on a thirty euro model that is made entirely of steel, because I didn’t want any plastic details that can potentially break.

The great saving is the razor blades. The reason for having to throw away disposable blades after a few shaves is that they clog up; not that they become dull – it only appears that way. In theory, they’re good for some hundred shaves if they’re cleaned. And so are the blades of the safety razor, only way cheaper. Buying ten blades for a safety razor costs about three euros. And, since they are easily removed and cleaned during and in between shaves, they will last for at least a hundred good shaves. That means that after buying the safety razor itself, the annual cost may be something like sixty cents for two very hairy people, instead of 240 euros for buying disposable blades. 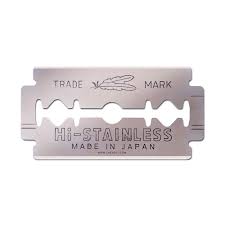 Now, beware: the companies selling safety razors and blades try to mystify the shaving process in order to sell additional products. They claim that you need special ointments and brushes and soap and gadgets. You don’t. I use inexpensive sunflower oil from the supermarket for skincare in general and also for shaving. It’s better than soap of any kind, but should you prefer a lather to an oil, you can of course use regular soap as well.

I find shaving with a safety razor quite easy – only slightly more time consuming the first times, before I got the hang of it. The shave gets closer and I experience absolutely no dryness, irritation or ingrown hairs afterwards; these problems are actually mostly caused by using disposable, multiple-blade razors. Why did I not know this?